Dr. Siouxsie Wiles made a career from combining her twin passions of bioluminescence (think glow worms and fireflies)and infectious diseases. Siouxsie studied medical microbiology at the University of Edinburgh, UK and completed a Ph. D. in microbiology at CEH Oxford (formally the Institute of Virology and Environmental Microbiology )and Napier University, Edinburgh. She then spent her postdoctoral years at Imperial College London, developing bioluminescent derivatives of various infectious organisms. Her work on Citrobacter rodentium culminated in winning the inaugural 3Rs prize from the UK National Centre for the Replacement, Refinement and Reduction of Animals in Research (NC3Rs )in 2006.

In 2007 Siouxsie was appointed as a Lecturer within the Department of Infectious Diseases and Immunity at Imperial and began to work on Staphylococcus aureus and Streptococcus pyogenes. In 2009 she was awarded the Sir Charles Hercus Fellowship from the Health Research Council of New Zealand and relocated to Auckland, maintaining an honorary position at Imperial. Siouxsie was also recently awarded the NZ National Animal Ethics Advisory Committee 's 3Rs award for 2011. Her area of expertise is biophotonic imaging, while her research interests lie in investigating microbial transmission and hyperinfectivity.

Siouxsie says that she is completely in awe of the natural world and the power of the scientific method to aid our understanding of it. Unfortunately, people often have the impression that science is irrelevant, boring or too hard to understand and that scientists are geeky and aloof. She believes that scientists have a responsibility to dispel these myths and act as advocates, both for science in general, as well as their field of interest. For these reasons, you will find her writing about miscellaneous science and skeptical stories at Infectious Thoughts on Sciblogs, the biggest blog network of scientists in New Zealand. You might also find her ranting about
pseudoscience on the Completely Unnecessary Skeptical Podcast (CUSP ). Siouxsie was awarded the New Zealand Association of Scientists (NZAS )Science Communication Award in 2012 and the Prime Minister's Science Media Communication Prize in 2013.

In 2016, Siouxsie was named a Blake Leader by the Sir Peter Blake Trust, and in 2018 was one of three finalists for the Kiwibank New Zealander of Year award. She recently published her first book, ‘Antibiotic resistance: the end of modern medicine? 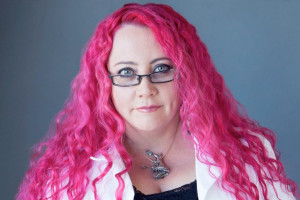